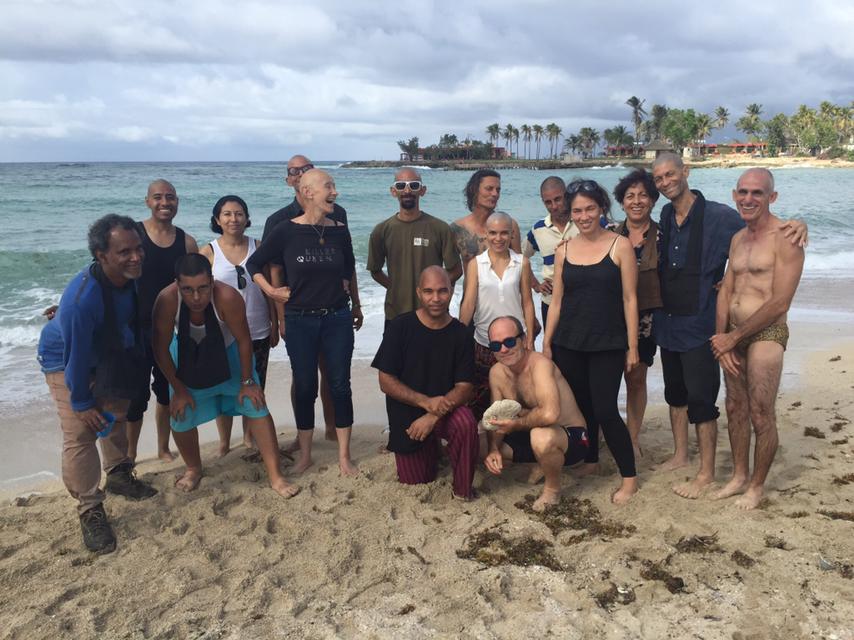 On the 24th transportation for the 27th had been canceled and it didn’t look like anything could be done about that. I told  the few who were interested that everything would be all right, to not loose hope, that something better would be arranged for. On Saturday morning I did zazen. When we left the Dojo we, Julito and Dayan, went for a coffee. We arranged with somebody who owns a bus to come to the Dojo on Monday the 27th at 8 in the morning. This is how we left on a trip to a big house called ‘La Faraona’, on the coast of Matanzas Bay that morning.

As agreed, this time the driver kept his word and arrived at the Dojo at 08.00, allowing us to leave at 09.30. We actually spent more time waiting for somebody who was late and we had to load the things from the Dojo in the bus. The trip went reasonably well until  Canasí, a place between Havana and Matanzas. There, we had to stop for about one hour because one of the filters broke and we had to help the driver to start the bus, it was a big show. The driver must have been surprised because, instead of becoming angry we all laughed and sang. We had to get off the bus and see how we could start it going in reverse, downhill in a curve.. In the end we were taking turns pushing hard with our hands, we held the steering wheel as well, it was funny. The bus started and we got on quickly and with the excitement, we sang Bombochie Chiecha all together to congratulate the driver. After the song ended, however, the bus stopped again, for the same reason. We ended up having to change the filter, something suggested by Shusso Alba from the beginning. After this, we went to Matanzas without further interruptions and we stopped right at the patio at the back of the house.

When we arrived at around one, Manuel and Darnelis who practice at Matanzas were had already started preparing lunch. We were joined by two more from Matanzas and Barbara came with 4 people from Mexico. Altogether, there were 22 practitioners who stayed during the whole Sesshin. Several of us held the Kyosaku responsibility. I organized the Samu and was treasurer while  Lisseth served as Tenzo. Andrés, Dayan and Chino Lee worked in the Service and Michael served as Secretary to Barbara. The short period of 4 days made us aware of our emotions and the use of time. The Samu consisted of helping in the kitchen, cleaning and sewing for which Alba was responsible. Many of us sewed as we were expecting ordainments. Sometimes we were sewing in the entrance hall, at the side of the house. The front had seaside views. We were assigned a room on the inside of the house where three people slept, outside was another spacious and climatized room that held two beds and a mattress, a small kitchen and toilet. At the back, upstairs, Sensei went to sleep at 10.30. On the left hand side was a large patio with trees and coconut palms where some practitioners camped. On the right where the kitchen, toilet  as well as a large space for three big dogs that, for their size, barked very little. At the back was a sunshade of balsa tree which is used as restaurant and we prepared this space to be used for the Dojo. The Zafus were placed in the Bar and the Kolommos were hung on a clothes line that we made with a rope. We had nothing to elevate the altar with, so we used a chair and two stools with a cloth over them and this way it worked for the Buddha during the Sesshin.

Wake up time was at 6.30, and we were woken up by Luis. Zazen, walk, breakfast. Samu, Zazen, lunch, siesta, Samu, Zazen, dinner, Zazen and the small bell was struck by Alexei. Manzanet, who is an expert in shiatsu, was at times very solicited by people who had never experienced this before. The first day he ended up going to sleep very late as he was giving shiatsu to many people, which is why the next day, we decided to strike the wood at 3.30 for those who wanted to receive a massage in the Dojo. We had our meals frequently beneath the trees, and enjoyed the pleasure of Sensei’s company for some time afterwards. On one occasion, after having talked for a while she told us, just when he arrived, that she would give Michel transmission. Those of us who were present were delighted by the news that would also be officially announced by Sensei Barbara in the Dojo. On the second to last evening, the weather decided to change and there was a small threat of rain during the zazen of the afternoon. Sensei decided to hold a Mondo during which we took the opportunity to arrange the carpets better as they were getting wet. During the second part of the Zazen session, as if the sounds understood each other, when the bell stopped, the rain also stopped. Beautiful chance occurrences that we experience because we practice the Way.

The next day, those who were to be ordained woke up knowing that their still completely new Kesa and Rakusu envelopes had to be handed in in order to be decorated with calligraphy. They were happy, but some perhaps a little bit nervous. They shaved their heads and  those who weren’t yet shaved were told they could do it during the time normally used for Samu. For Dayan, Manzanet and Darlenis it was a wonderful dawn, with a slight misty rain which ended in a beautiful rainbow that penetrated the sea in the center of Matanzas Bay. The were about to be ordained as Bodhisattva, while Lisseth, Chino Lee, Manuel, and the Mexicans, Danitze and Miguel, were to be ordained as Nun/Monk. In addition, a Rakuso would be given to a boy from Mexico and Kesas of 9 bands would be given to Alba and Monji. We had two Zazen sessions and prepared the Dojo according to Sensei’s instructions. Time was getting shorter as we were getting to the end of the afternoon when the clean faces and white kimonos arrived. At six the wood was struck to call us to the dojo, followed minutes later by the sounds of the Little Bell, Wood, Bell, and Drum and the arrival of Sensei. The Bodhisattvas, seated at the front, and Monks, seated behind them, waited for their attributes to be placed on their bodies with help of elder practitioners. We were all very happy and all took the precepts of the Way together. Afterwards, we congratulated everybody with hugs and kisses, and we took photos with our mobile phones and cameras.

After these happy moments, we were offered a dinner prepared by a new kitchen crew, directed by Irma from Mexico, who was advised by Lisseth and Andrés. They prepared pork loin, fried plantain, Arroz Moro (Moorish rice), salad and vanilla ice cream. There were two bottles of wine and milk for after dinner talk. The evening advanced little by little as we enjoyed ourselves talking, listening to music and watching spectacular magic tricks performed by Hugo from Spain. It became early morning while we were at the table and quietly Chino Lee and me, as samu-man, made sure everyone went to sleep.  The last day, there was one Zazen, and during the rest of the morning we cleaned up and dismantled the Dojo, restoring it to “La Faraona” ranch with stools as tables like it used to be. We prepared a great farewell lunch, our transportation arrived on time and we started loading the things little y little on the bus. First the material from the Dojo, kitchen utensils followed by our personal baggage. We went without stops to Bucuranao Beach, close to Alamar for those who had not yet had the opportunity to visit this beautiful beach. It was quiet there and there was little sun. We spent about one hour there, taking pictures and Sensei enjoyed a coffee that a lifeguard sold her. We left and at 3.30 we arrived at the Dojo where we unloaded part of the bus, a little hurried as it appeared it was going to rain, which it never did. We said goodbye and arranged to meet later on.

I went for an ice cream with Luis after which we both went our own way. I had to be at the Fábrica del Arte (FAC) at 8 but could not contact anybody because I left my phone charging. When I got there, nobody else was there but I met Omar Pérez by coincidence who let me in as a guest. It was the first time I decided to visit this place with offerings in original spaces of geniality with an interminable happiness about it. While waiting for the Sangha that did not appear, I shared some moments with Omar and later on with Alba. Upon leaving the place, I saw the Mexicans, we went for a walk and went to a concert of instrumental, classical film music, performed by a chamber orchestra. After this, we went to a place with a stand of the the ‘Teatro Espontaneo’ theatre, when all of a sudden we saw Andrés, Dayan, Hugo and Sensei who just arrrived at the complex. Andrés gave me the bad news that someone had to go to the Dojo as a water tap was left open and could cause damage to the neighbor’s houses. I left in a hurry. When I got to the Dojo, I had to remove the carpets that were about to get wet, and get the water out with a broom and go with a blanket through the dry places. I went back to the Fábrica were I left the others, but no one was there anymore. Since Luis lives close to the Fábrica, at one block away, I went to see him and invite him out. We had an enjoyable evening until closing time. I decided to go back to the Dojo in order to organize it as best as I could, so that it was ready for practice. I went to bed at 5.30 and got up again at 8.30. I managed to talk to Michel and we arranged to meet where Sensei was staying in order to say goodbye to her. I went there and almost everybody had come to see her off.

We said goodbye, but I wanted to show Havana to Miguel and Danitze, which is what I did. We traveled by bus, walked quickly, I bought them books, they bought some craftwork and we visited the historic center. After this we went back very quickly to Esteban’s house. I wanted to go with them to the airport, just to be sure, Miguel had some trouble checking in and on top of that the flight to Mexico was delayed. They had to wait one more hour, so we had a sandwich and a farewell toast.

On 2 December, the Samu consisted of reorganizing the small Dojo, that morning Michel started  with a new practice and the introduction to the Shin Jin Mei.

Dear fellow Sangha members: Hello everyone; I hope you are well and in good health.… Read [+]