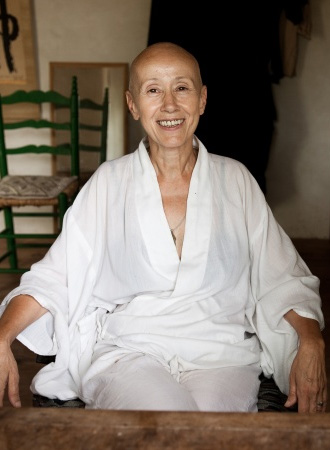 In the eighties, Master Deshimaru asked his disciples of the Paris Dojo to write their biographies. I must have been 27 or 28 years old and, besides practicing Zazen and following his teachings, my life seemed to contain little adventure. Even so, I started; and did so by telling the story of shrimp fishing. When I was 10 years old, at the end of vacations in September, during the period of great tides, my father and my grandfather would take us shrimp fishing. Preparations were long and thorough. In the morning, at sunrise, mi grandmother would go to the market to buy an assortment of cheap fish. Afterwards, my grandfather would skewer fish heads in the crab net, calmly cursing because he pricked his fingers.

We would star with the high tide, throwing the crab nets from steep rocks, the waves licking or feet, and we would take out crabs from the sea. Of course, to gather the crabs and put them in the basket was a hell of a story. Once at home, we would put all our crabs in a large jar and wait until they were dead. Again my grandfather would skewer the crabs in the nets and we would go out again, this time with the low tide, to fish for shrimp. Generally these expeditions would result in a total fiasco and my father would end up buying beautiful shrimp at the corner’s tavern, in front of a white wine glass.

My biography had to start this way, but my companion at that time quickly made me understand that that was of no great interest, that it was stupid and that I would better quit the idea of telling the story of my life. Almost twenty years have passed since then and again I find myself in the predicament of writing my biography. Once again, besides practicing Zazen, shaving my head and wear the Kesa every day, my life does not seem very hazardous or too exciting to others. So, I shall go back to shrimp fishing. What impressed me the most, as a child, was the absurd of such actions, aside from the fact that we had some good times.

It was ridiculous, absurd, and human with its cries and colors. It´s what I would have liked to express in those times and what I would like to express now. I have not had an awakening to the fact of impermanence; rather, the actions of the world such as it is suddenly seemed to me far apart of their objectives. The world, as had been shown to me by my parents, my ancestors, my tutors, etc. appeared to me absurd and blocked.

The traditional religion in which I had been educated by my parents failed to bring any tranquility to me. Neither my studies managed to bring me freedom. The question Why? Had no answer, and neither the question How? After a pilgrimage among doubts, fear and cynicism, ii found zazen and the marvelous teachings of Master Deshimaru. Everything was clear, straight and luminous. This way, my life is that of a young girl who went to fish for shrimp and, on the way, found a shining pearl.”

Barbara Kosen Richaudeau was born on June 7th, 1951. She studied sculpture, clay modelling and also history and archaeology at the Sorbonne University during the tumultuous of the post May of 68 Paris. There, at an informal workshop during a strike in her faculty, the words of a student declaring what it meant for him to be a Buddhist provoke a deep resonance in her. Shortly after, under the influence of this revelation, she meets Master Taisen Deshimaru, from whom she will receive the Zen nun ordination in 1975. She would accompany him until his death in 1982.

The Soto Zen lineage that reaches until Barbara Kosen, and which she guards, holds a resolute attitude of updating Zen in every time and place, as well as prioritizing zazen practice. It’s the revolutionary Lineage started by Shakyamuni, the Buddha, and reformer of spirituality in India. It is also the lineage and path of Bodhidharma, who regenerated Buddhism by moving it to China where, under the influence of Tao, germinated as Ch’an, the Chinese Zen. Seven centuries later, Dogen will also make his trip to China from Japan. Upon his return he will establish, with his living and written work, the principles of the most pure and profound practice: Shikantaza – only sitting – starting Soto Zen in his country.

In this same line of non-stagnation, Master Kodo Sawaki, “Kodo without a dwelling”, scholar of Dogen’s Shobogenzo and renovator of the languishing Zen in Japan, will entrust in 1967 to Taisen Deshimaru the introduction of Zen in Europe, creating the conditions for its evolution and rejuvenation by submerging it in new cultures and ways of thinking.

Searching for an appropriate place in which to develop the Practice in action, in 2001 she builds the Shorin-ji Temple under the crags of Gredos in the region of La Vera to continue disseminating the spirit of the Way and the practice of Zazen. At this place, where the direct manifestation of nature’s phenomenons and changes and the intimate experience of the daily physical work mingle familiarly with Shikantaza, Master Kosen imparts her exact and radical teachings beyond the contradictions of a stupefied European society, updating the essence of Zen with an open, detached and cool attitude.