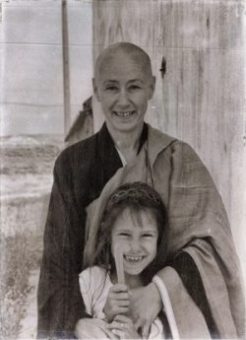 Master Taisen Deshimaru is the master who taught me the practice of the Way. I became his disciple and I received the ordination of nun in the dojo of Paris in 1975. I practiced close to him. After his death I spent three years in the Dojo of Zürich, then 7 years in the Dojo of Geneva. During these ten years I have continued to practice in our Temple of La Gendronnière. En 1993 I received the Dharma transmission from the hands of master Kosen Thibaut right here in the Gendronnière. Master Kosen transmitted to us the Dharma following the rite of the same ceremony as the one he had received from Renpo Niwa Zenji. The following year I established a dojo in Madrid.

It is traditional, it seems, that the zen master leaves a last poem before dying. For all his disciples Master Deshimaru wrote: Continue zazen eternally. Of course when I told this sentence to the new practitioners of the dojo of Madrid, there has been a smart spirit who told me: eternity does not exist. But he was ignoring that despite the remoteness of my original sangha, thanks to the merits of the transmission of the Dharma, I was accompanied by the ancient masters of the past who were pushing me to go forward and to protect the transmission. That is the eternity of the practice, it never stops and finally, in the eternity I am never alone.

In 2001 the Association Zen Taisen Deshimaru, founded in Madrid in 1996, has bought a piece of land in the slopes of the Sierra de Gredos in order to establish there the practice of the Way. We founded the temple of Shorin-ji, Temple of the Forest of the Awakening. This site became rapidly the place where we organize the sesshin all along the year and where live permanently between 4 and 8 persons. Zazen is the heart of it.

In the teaching that I received the zen is zazen. Why did I not evolve towards a more institutionalized zen where the concentration on the ceremonies becomes the manifestation of the zen spirit? For the good reason that from the first day when I sat down in zazen, the practice has been good for me. It allowed me to rebalance my life; to make me consciously alive. It permitted me to abandon the procession of the natural discriminations that I was carrying inside myself. It directed me toward a deep knowledge of myself that naturally opened me towards the other existences. That is what I wanted to transmit to all the ones who came to the Dojo. Why to add anything else? Zen is very simple, it is the reason why it appears so complicated to us. What is important for the students is to find back the true happiness of being.

One of the great teachings of Master Deshimaru was on the problem of the human destiny. Balance the materialist world with the spiritual world. Lately we are the witnesses of the side of the political world where the struggle for power takes the face of the lie, of the anger, of the lust, with an egoistic determination facing the human gender: the manifestation of the three poisons. Is that the true face of humankind? Is that the only valuable model? How the zen monk can contribute to the evolution of the moral dead end in which lies our society? How to operate such a transformation, an evolution of the human race?

From the 30 last years where the European sangha has been left alone to itself, the fight for the right and the wrong has impregnated us through the emanations of the three poisons. We have followed the system, everyone being certain of his own truth, without making any real efforts to reconcile us. At the origin our full energy has served to maintain alive the treasure that Master Deshimaru bequeathed to us. But if we continue to imitate the world of the red dust in our interaction, then the merits of his mission will be lost. We have succeeded in developing strong sangha determined to open numerous dojos but still facing the human suffering, the impact of zen stays minuscule and I believe that we should raise the level and cover the world with a great kesa. Never mind that the zen be Japanese or universal, that remains in the domain of the thoughts, of the defilements; let us rather manifest the true wisdom of hishiryo. Let us become real wise persons near the ones the world can find advise. Let us not follow the political systems, but let us become the true creators of the human wisdom. Let us not enter into a system of grades and positions but let us manage that the young monks, the future of our missions, show the spirit of the bodhisattva and turn toward the world without being influenced.