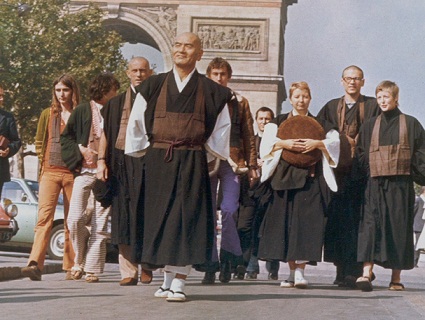 The evening of next December 1st, the Asociación Zen Taisen Deshimaru will hold an open house event in Mokusan Dojo for those interested in the introduction of Zen Buddhism in Europe.

Such initiative responds to one of the objects included in the Constituting Statutes of the AZTD and intends to contribute to the rapprochement between the cultures of Asia and Europe, especially to divulge an ancient wisdom that can bring some balance to our society so much imbued in materialism. This was the aim of the Japanese Zen Monk Taisen Deshimaru (1914-1982) who travelled from Japan to France with nothing but a little money, his practice robes, eating bowl and zafu (traditional cushion for Zazen), yet having the encouragement from his Master Kodo Sawaki who, before dying, entreated him to plant the seeds of Zen in new lands.

Taisen Deshimaru, with his natural force and awakened expression, often manifested a bright sense of humor, but occasionally he would frighten even the most reckless of his disciples with his uncompromising severity. Attracted by the charismatic Master, the inflow of disciples was steadily increasing, the majority coming from Paris all through the 70’s, a time of freedom of expression, rebellious energy and spiritual search. In this context Master Deshimaru taught the essence of the Zen tradition, which had been transmitted to him by his Master, who had also received it from his own, as it was the case all along an uninterrupted chain starting with Shakyamuni Buddha. Its essence is the practice of sitting in silence letting go of any goal or purpose, holding a posture that favors concentration abiding in our present time and space, being present in the activity of being seated. This is called Zazen, a Japanese word deriving from the sanscrit Djana.

Master Deshimaru’s mission was successful, as numerous dojos were opened all though Europe and hundreds of disciples followed. He represented an outstanding passage between Science and Religion, Philosophy and Spirituality, East and West, Asia and Europe. He could transmit the specific universal in every one of us without depending too much on the formalisms of his own Japanese tradition, but succeeding in making european men and women open their minds and hearts to this millenary practice, Zazen, that addresses directly questions like How to live? How to die? How to transcend suffering?, not from the intellect, but from the body.

Sensei Barbara Kosen follows the teachings of his Master Deshimaru in Madrid since more than 20 years ago, herself teaching and offering the opportunity to practice zazen in a true Dojo, in order to be able to transfer this conscience to daily life. She came to Spain with the motivation to establish the practice of Zen and to help locals, especially women, to carry out the ‘inner revolution’. She founded the Asociación Zen Taisen Deshimaru and Mokusan Dojo right in the heart of the city. A few years later the Association purchased a mountain wood in La Vera County, Cáceres, and the small temple of Shorin-Ji was built, where the environment gives a lot of depth to the practice and great activity often takes place.

The language of sounds, the calligraphy, the manual work (samu) that maintains and ameliorates the practice site, the sewing of Kesa –i.e. the robe of the field of happiness- are all activities born from and around the practice of Zazen. This is what Asociación Zen Taisen Deshimaru and Master Barbara Kosen wish to showcase on the evening of Saturday December1st from 16:30 until 19:30 hours at the occasion of this open house event.

An exhibition space, a conference, a practice-oriented approach to zazen, and a documentary film on the figure of Taisen Deshimaru and the introduction of Zen to Europe. The event has for title DE-ZEN-BER ONE. A short, onomatopoeic, concise and easy to remember name, maybe because it will be used again on future occasions…