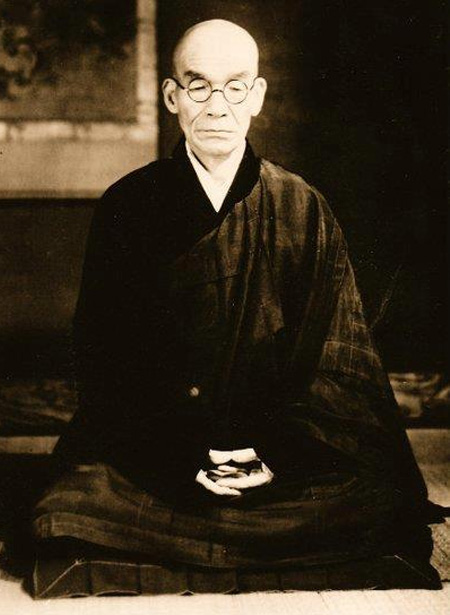 Where this practice is exercised, the calm spirit manifests itself in an omnipresent way

Kodo Sawaki Roshi (1880 – 1966). He was born into a wealthy and happy family, nearby the Ise Shrine. His name was Tsaikichi. When he was 5 years old, her mother died and at the age of eight, he lost his father. When his uncle passed away, he was adopted by a friend of his, Sawaki Monchiki. This was a weak and lazy man who only believed “in tobacco and sex”, and who had had eleven wives. The current one being a prostitute given to hysteric tantrums.

At thirteen years old, Tsaikichi had to work to feed himself and, in this sordid neighbourhood, he became a spy paid by the gamblers. Having witnessed the death of an old man in a brothel, he realized suddenly that he didn’t want to end his life in such a dishonourable way. Horrified by his way of living, this incident places him on the way of Buddhism.

When he is 19 years old, he meets Fueoka Sunum Osho. Fueoka Roshi had studied for several years with Nishiari Bokuzan Zenji, a great Zen master of the Meiji era (1868 to 1912).  He teaches him the just way: not to search for satori or anything else, simply to sit in zazen. This relationship master – disciple lasts for a year and is interrupted by the Russian-Japanese war, in which he participates and where he was severely wounded.

After these 5 years of interruption, when he was 29, he enters the school at the temple of Horyo-ji at Nara and takes philosophy courses without ever neglecting zazen and the Shobogenzo. In 1912, he is the first assistant of the Yosen-ji dojo. Afterwards follows a period of solitude which he breaks when he is 37. In the following years he performs several functions in different temples. In 1935, he gets to be zazen educator at the University of Komasawa and, later on, godo at the Soji-ji temple.

It is at this moment, in 1936, that Yasuo Deshimaru becomes his disciple. Just before the war, Kodo Sawaki was also directing a great temple in the mountains, Tengyo Zen Ien. After the war he becomes a sort of celebrity in Japan, organizing sesshins and summer camps in several temples. He teaches both laic people and monks, giving conferences in universities and in prisons and participating in the constitution of numerous dojos. He has been called “dwelling less” Kodo, because he refused to establish himself in a temple and travelled always alone. He brings the fading Zen a new inspiration, reintroducing the universal practice of zazen. During this whole period, Master Deshimaru was following him wherever he went and Kodo Sawaki transmitted to him the essence of Buddhism.

When he was 86, he falls gravely ill and spends the last three months of his life at Antai-ji, a temple transformed by him into a place for a pure practice. From his bed, he spent a long time looking at the Takagamine mountain and, three days before his death, he told a nun:

Look at that. Nature is magnificent. In all my life, I have never encountered a person to whom I could have submitted and who I could have admired.
But this Takagamine mountain looks upon me form the heights saying: ‘Kodo, Kodo’

These were his last words. He passed away on the 21st of December, 1966, at a quarter to two in the afternoon.